From PikselProd
Jump to navigation Jump to search 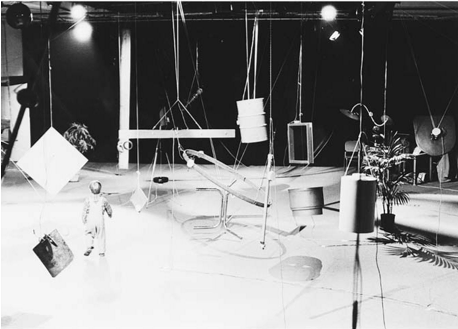 REGNSKOG: a Collaborative Workshop/Performance/Installation in the Spirit of David Tudor

Over the past few years, a strong reaction against the sterile world of laptop sound and video has inspired a new interest in analog processes, or "hands dirty" art in the words of practitioner John Richards. With this renewed analog interest comes a fresh exploration of the pioneers of the electronic arts during the pre-digital era of the 1960s and 1970s. Artists and inventors such as Nam June Paik, Steina & Woody Vasulka, Don Buchla, Serge Tcherepnin, Dan Sandin and David Tudor all constructed their own unique instruments long before similar tools became commercially available or freely downloadable--and often through a long, rigorous process of self-education in electronics.

David Tudor, in particular, has become the focus of intense interest (c.f. Leonardo Music Journal 14, 2004). His transformation from John Cage's concert pianist to an electronic performer and autodidact engineer in his own right is archetypal for the contemporary media artist, who also must oscillate between the creative and the learning processes. His work "Rainforest" also stands out as an exemplary model of the collaborative process within a technically defined, yet socially open system.

"Rainforest" used a series of transducers to play prerecorded and live sounds through various resonant metal objects suspended by wires in the performance space. It was also conceived as a workshop, involving different musicians and artists in a collaborative setting, each contributing their own sounds, ideas and energies to the performances, which often lasted four or five hours! A complex mixer system allowed the sounds coming from one resonant object to be directed through another, spawning chaotic generations of new sound patterns. The sounds played could be heard through loudspeakers as well as the objects themselves, however they could also be physically felt by touching the objects. Tudor was especially interested in two audiences: children and the blind.

"Regnskog" is conceived as a contemporary re-interpretation of "Rainforest" as a workshop, performance and public installation. In the spirit of Tudor's work, much of the equipment and materials will be built by the participants/performers themselves.

Bergen Kjøtt is an old meat factory turned into artist space. It contains artist studios, music studios (Duper), rehearsal rooms, architects, designers and more. It's all kept raw and factory-like. Here's some images of the room where we'll be working:

Here is a graphical overview of the signal flow of Regnskog:

The central "hub" of the installation will be an 8x8 matrix mixer, built in Pure Data using a Hammerfall HDSP soundcard as interface. This will allow the sound from any object to be sent to any of the players for processing. The status of the matrix mixer will also be sent via OSC to Gisle, who will visualize this (also in Pd/GEM?).

As shown in the diagram above, each channel will require one of the following things. There are 8 channels in total.

- Preamp: a simple, low power circuit to amplify the sound from the pickups to line level before entering the matrix mixer. (Derek can construct/order these)

- Instrument: that's where the players come in. Each of you should bring or construct some sort of instrument capable of taking the signal from the matrix mixer and processing or manipulating it in some way. Simple transformations could be filtering/equalizing. More complex processing is up to you!

- Transducer: there are many kinds of transducers, see TECH NOTES below. It would be good to know what kind of transducers the participants can bring. Derek may order a set of matching transducers besides.

- Pickup: simple piezoelectric "contact mic" pickup most likely. There are many other kinds of pickups and participants are encouraged to bring and experiment with others. Derek will bring a bunch of piezos.

Besides these things, we will also require the following elements in the space:

- Stereo PA: a stereo mixdown of the matrix mixer will be available from the HDSP headphone output. So we will need a basic stereo PA. Keep in mind that this is mostly for a general room sound, and that visitors are encouraged to experience the sounds directly from the objects by touch and hearing. 1KiloWatt of power per channel is definitely overkill, it will depend on the space and how much rooom sound we want...

- Video projection system: the status of the matrix will be sent by OSC to Gisle's PD patch, which will visualize it and send it to the data projector. Other suggestions (from Gisle?) include: (hm. maybe not visualizing in the traditional sense. I might use the osc input, but was more thinking of finding some way of using video similar to the original Tudor ideas of specialized multichannel output.)

- Suspension system: the objects will be suspended from the ceiling with metal cable, so we will need to figure out exactly how this can be done in the space

Vibro motor - http://www.seas.no/ Gisle may investigate getting some sponsorship from them

Rolen Star Audio Transducers (full range but easy to blow) http://www.rolen-star.com/ We can borrow 5 or 6 of these from a friend in Copenhagen

SinusLive Bass Pumps (low frequencies only but very robust) http://www.amazon.co.uk/Sinus-Live-Bass-Pump-III/ Derek can bring 3-4 of these

Julien says: "a strong magnet + a copper wire loop type as speaker filter component part", we are hoping to get some actual part numbers from Julien to order so we can try this

For the really simple approach (stripped down speaker connected to a sofa!): http://lumenlab.com/forums/index.php?showtopic=17062

What do we need?

- Each participant flown in from the EU brings a bottle of some Spirituous from the Duty Free (you know who you are...)

-amplifiers / this is a very important features, if we could have 50W amplifiers (not hifi) but preferably PA's one (feedback will easily destroyed them)

-1 amplified speakers / PA (I still do think, and David Tudor was always in this case) have our own speakers (best: a mono or stereo PA system / or at least a strong pair of monitoring studio speakers -Yamaha like)

-light (PAR?) for sculpture and musicians

-theatre installation cable like + hooks, the kind of things which we will use to hang up the sculpture (very important)

-tools to work out the sculpture (holes...) / gloves

What can you provide?